After recording one of the worst sell-offs in all of 2018, the crypto market has experienced a minor corrective rally, adding $8 billion to its valuation.

Since August, BTC had defended the $6,000 support level, which has since turned into a major resistance level. Hence, if BTC initiates a corrective rally throughout the next three to four days to the $6,000 level, then it will be possible for the dominant cryptocurrency to end 2018 with a positive note.

However, if BTC struggles to breakout of the $6,000 level, then it will be difficult for the market to escape its low price range by the end of 2018.

A further downward movement by Bitcoin is still possible from the mid-$5,000 zone. Cryptocurrency trader and technical analyst DonAlt said that BTC had a decent daily movement on November 16, but it will need to show some momentum in the high $5,000 region to confirm a positive short-term movement.

“It’s been a good day for BTC. That doesn’t change the fact that we’re approaching resistance. On the charts are the three setups that I’d be willing to trade. S/R flip or rejection on red, long green or just a straight up nuke from here.”

Crypto Rand, a respected digital asset analyst, stated that a fall to the $4,800 to $5,000 range is possible, given that technical indicators have not shown any signs of a bottom. 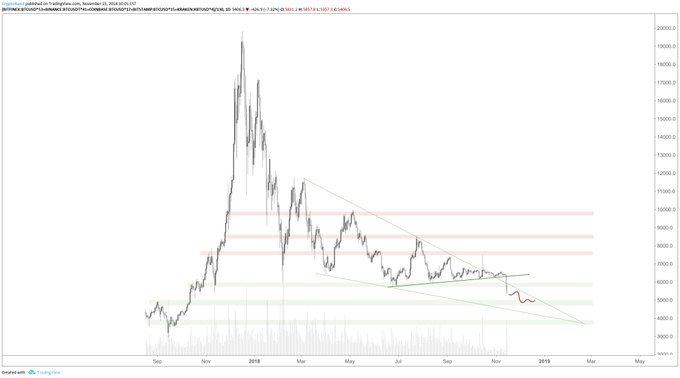 I don’t see any bottom signal yet.

Prior to the sudden 11 percent drop of BTC, Willy Woo, a Bitcoin analyst and the founder of Woobull.com, said that BTC demonstrated a typical sell signal. Woo analyzed both technical and fundamental indicators of BTC including the Bitcoin network’s transaction volume, to predict a downtrend.

“This last reading of our blockchain and macro market indicators is still in play. What has changed is that NVTS has now broken its support, typically a sell signal,” said Woo, adding that all of his indicators show a bearish trend. “All our blockchain indicators remain bearish. NVT, NVTS, MVRV, BNM, NVM. They are experimental but have served to make very correct calls to date, even when traditional on-exchange indicators were reading to the contrary.”

The volume of BTC remains at $6 billion, still at a high level due to the spike in daily volume on November 14. On Wednesday, the volume of BTC temporarily spiked to $8 billion, doubling its volume within a three-day span.

Over the last 24 hours, Ripple (XRP) and Stellar (XLM) recorded an increase in price in the range of 2 to 4 percent. Primarily because of the downtrend of BTC, major cryptocurrencies and small tokens have started to demonstrate independent price movements.

A lack of dependence on BTC can be considered as a positive change in the market, which relied on the short-term price trend of Bitcoin for at least the past four months.

Does your website need millions of visits? Buy website traffic cheap at 10khits for just $29 and get hundreds of thousands of visits per month or simply you can earn free website traffic! Then please click this link https://www.10khits.com/?ref=452345