Our explanation of bookkeeping attempts to provide you with an understanding of bookkeeping and its relationship with accounting. Our goal is to increase your knowledge and confidence in bookkeeping, accounting and business. In turn, we hope that you will become more valuable in your current and future roles.

Bookkeeping: Past and Present

Bookkeeping in the Old Days

Prior to computers and software, the bookkeeping for small businesses usually began by writing entries into journals. Journals were defined as the books of original entry. In order to reduce the amount of writing in a general journal, special journals or daybooks were introduced. The special or specialized journals consisted of a sales journal, purchases journal, cash receipts journal, and cash payments journal.

The company’s transactions were written in the journals in date order. Later, the amounts in the journals would be posted to the designated accounts located in the general ledger. Examples of accounts include Sales, Rent Expense, Wages Expense, Cash, Loans Payable, etc. Each account’s balance had to be calculated and the account balances were used in the company’s financial statements. In addition to the general ledger, a company may have had subsidiary ledgers for accounts such as Accounts Receivable.

Handwriting the many transactions into journals, rewriting the amounts in the accounts, and manually calculating the account balances would likely result in some incorrect amounts. To determine whether errors had occurred, the bookkeeper prepared a trial balance. A trial balance is an internal report that lists 1) each account name, and 2) each account’s balance in the appropriate debit column or credit column. If the total of the debit column did not equal the total of the credit column, there was at least one error occurring somewhere between the journal entry and the trial balance. Finding the one or more errors often meant spending hours retracing the entries and postings.

After all of the adjustments were made, the accountant presented the adjusted account balances in the form of financial statements.

After each year’s financial statements were completed, closing entries were needed. The purpose of closing entries is to get the balances in all of the income statement accounts (revenues, expenses) to be zero before the start of the new accounting year. The net amount of the income statement account balances would ultimately be transferred to the proprietor’s capital account or to the stockholders’ retained earnings account.

The electronic speed of computers and accounting software gives the appearance that many of the bookkeeping and accounting tasks have been eliminated or are occurring simultaneously. For example, the preparation of a sales invoice will automatically update the relevant general ledger accounts (Sales, Accounts Receivable, Inventory, Cost of Goods Sold), update the customer’s detailed information, and store the information for the financial statements as well as other reports.

The accounting software has been written so that every transaction must have the debit amounts equal to the credit amounts. The electronic accuracy also eliminates the errors that had occurred when amounts were manually written, rewritten and calculated. As a result, the debits will always equal the credits and the trial balance will always be in balance. No longer will hours be spent looking for errors that occurred in a manual system.

CAUTION: While the accounting software is amazingly fast and accurate in processing the information that is entered, the software is unable to detect whether some transactions have been omitted, have been entered twice, or if incorrect accounts were used. Fraudulent transactions and amounts could also be entered if a company fails to have internal controls.

After the financial statements for the year are released, the software will transfer the balances from the income statement accounts to the sole proprietor’s capital account or to the stockholders’ retained earnings account. This allows for the following year’s income statement accounts to begin with zero balances. (The balance sheet accounts are not closed as their balances are carried forward to the next accounting year.) 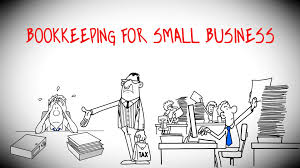 Here are a few examples of some of a company’s financial transactions:

With hundreds of accounts and perhaps thousands of transactions, it is clear that once a person learns the accounting software there will be efficiencies and better information available for managing a business.

I am an accountant, blogger, bookkeeper, business analyst, consultant, and financial analyst. You may contact may if you need some things or job to do. My Skype ID is mark_jbd121989. Thank you. View all posts by Mark Joseph Digamon

One thought on “Bookkeeping 101 Part 1 (Introduction to Bookkeeping)”

This site uses Akismet to reduce spam. Learn how your comment data is processed.